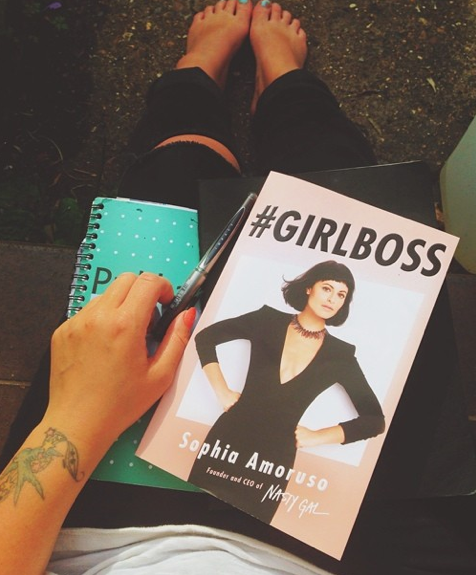 Where do I start? #GIRLBOSS an autobiography/positive vibes /Business book written by the founder and CEO of Nasty Gal , Sophia Amorusa, which i’m sure has been reviewed across the internet/newspapers and magazines for sometime. This is kind of a review but also me declaring I am a little bit in Love with Sophia. I had been meaning to pick up my copy as soon as it hit the shelves but being mega forgetful, it slipped my mind, I snapped mine up a few weeks ago on amazon for a tenner and ordered next day delivery as I was hungry for some inspiration.I read it all in six hours 239 intense pages before bed time, who would of thought it!

The way Sophia writes is humorous and witty, her rise to business mogul
only took 8 years going from a start up business on $50 to over  $100
mllion plus in such a short space of time screams to me her story must
be read (in my case several times.)

So I loved the layout of this book, from the offset, I expected the book to be sassy but I didn’t expect it to be so sassy, informative and so well written. I’m not gonna lie to you i’ve read it four times, I have highlighted quotes and relevant passages like its my chic bible of everything that will make me a multimillionaire, of i can dream, it was just nice to read such positive and thoughtful words from someone who has been through hard times and shown the world things are possible,  which to me is an exciting prospect.

I was recently discussing #GIRLBOSS with Rhi, when we both made a bit of an observation in certain areas of the book, Sophia comes across as a tad bit patronizing, don’t get me wrong she knows her stuff and if there is anyone out there to get me to shift my ass into gear its Sophia Amourso, I just felt in certain areas it was too much for me and I read those bits with a tad bit of cringe and oh I wish I was her.

The
book itself is divided up into 11 chapters and is laid out with lovely
quirky illustrations for each chapter with a little piece from an
awesome women in the business world called “portrait of a #GIRLBOSS” for
each chapter, I personally have a few favorites, Norma Kamali who talks about the importance of taking risks and to always dream.” My advice would be to dream and never stop dreaming.”

I would definitely recommend this to any lady out there interested in fashion, blogging, business or anyone wanting to reignite a spark for a passion they once had or if anyone is a little afraid to start something new. Don’t take it to seriously but its important to read about other peoples stories and have a few positive female role models in our life.

I enjoyed the elements of Sophia’s can do attitude, I can sometimes fall guilty of “I won’t ever make it” ” Man why are things so hard” “Shit i’m afraid of succeeding shit I’m afraid of failure” and it was nice to read about someone else outlook on things, yeah things are crap sometimes but they don’t always have to be.

“There’s also everyday kind of magic that we make for ourselves. And that’s really not magic at all. It’s just recognizing the fact that we control our thoughts and our thoughts control our lives”

Sophia talks a lot about having confidence in what you are doing and in yourself, talking about how your actions impact on the world around you. One thing I took away from reading #GIRLBOSS is You’ll never be able to convince someone else to believe in you if you don’t believe in yourself, ” a deep unshakeable self-confidence that persists even when things aren’t going great.”

Overall I really did enjoy #GIRLBOSS it has inspired me enough to get what I love doing back up  and running. Would be nice to get the can do attitude and sassiness back in my life and hopefully with this book it will get me back on my path.