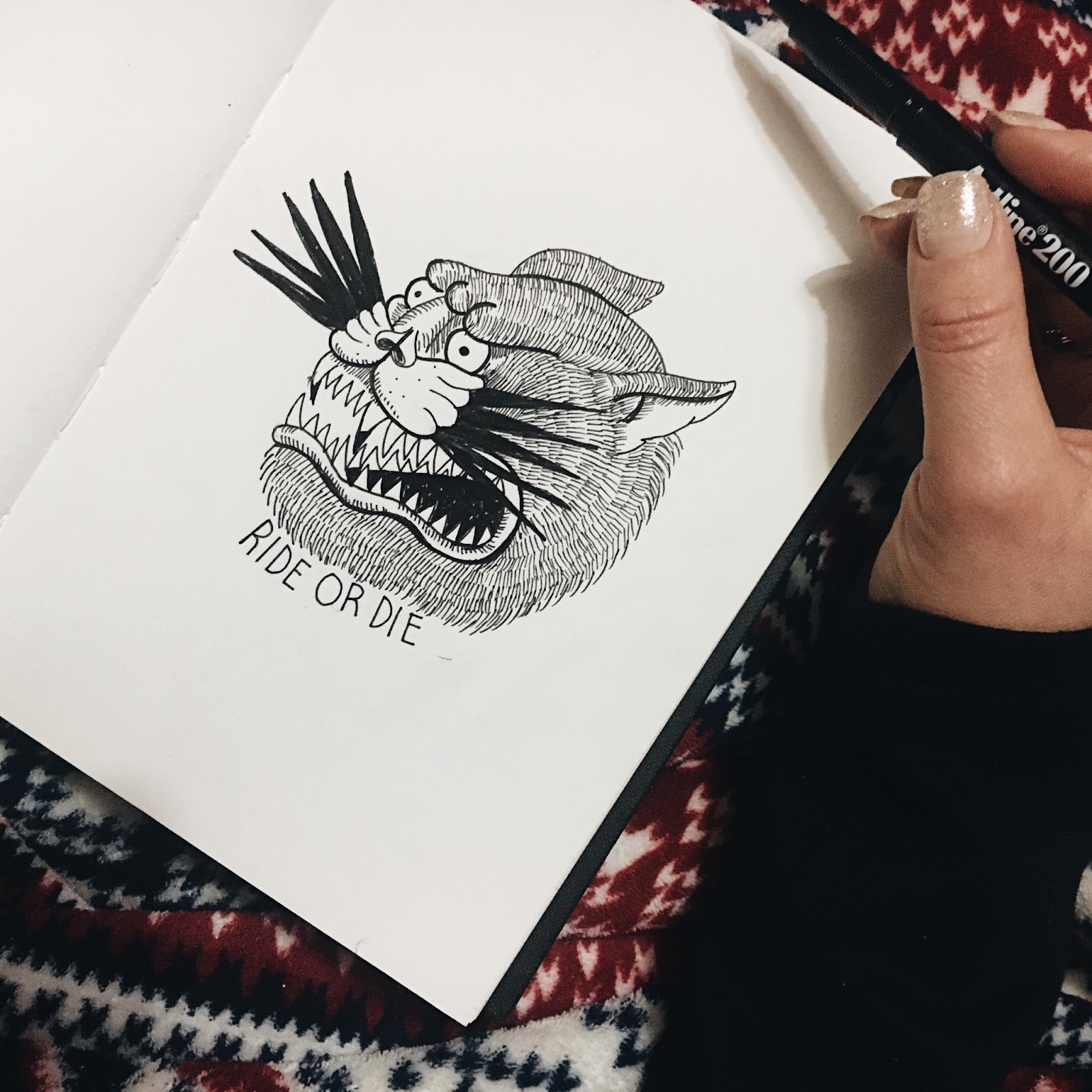 I have spent the last few months mainly working in around a thousand paid for private commissions, it’s been an absolute blast, getting to paint so many people and pets. The downside to working on so many private commissions means that my soul work (this is the work that I make just for me often hidden in the depth of a tatty sketchbook) is often neglected.

For Christmas I received four sketchbooks, three pens and Peter Rabbit cuddly toy, we’ve never been big on gifts in my house. So Christmas was really the first day off from paid work in about two months, so I took the new pens and sketchbooks and I started creating line work. I have been screenshoting inspiring tattoo artists and work from Instagram on my phone, my phone often doubles up as a digital scrapbook. So I was finally able over Christmas to just doodle for me. It felt so good to just draw, write and not care so much about whats on the page.

It’s nice to see my work after so many years heading in the directions that I want, getting recognition for my art work was really all I ever wanted, I realised something when I was travelling alone at 6:30 am on an empty metropolitan line train headed to BUST Craftacular that I had finally reached the moment I wanted to as a child, as child my dream was to live off the work I made, to be a paid for artist that was simply my dream. It felt rather surreal that I was heading to an event that I had been ask to attend, people were paying me to draw them. I had never really thought about it. I had ticked off my ultimate bucket list item. It that a bit braggy? a tad show off? well to be honest with you it felt as if I hadn’t reached the one thing I wanted, but I was clearly living it.

Do you know why it never felt like I had reached my ultimate childhood dream…..because I was comparing myself against other creatives I follow on the internet, on Instagram and follow on twitter, I felt like my target wasn’t great enough. I was obsessed as a child about creating art work, just the process of creating filled me with all the happiness I needed. So at what point did that not feel good enough to me? I sat down and had a word with myself, I sat down and wrote all the brilliant things I had managed to complete in 2016. The list was filled with magazine features, work on the BBC, big commercial work and I finally came to the conclusion that I had done some great things, but I knew and realised that if I could do these wonderful things then why stop there….I could at least try and attempt a few more wonderful things, why the hell not?

So as we speak I am surrounded by lists of things I want to attempt to accomplish as a blogger, artist and person. They aren’t too ambitious but the thought of completing them makes me rather happy indeed. They aren’t really a list for 2017 but things to complete in time, it’s taken me nearly three years of freelancing to finally be able to fully live off the wage I make to start properly saving for my future and also to be able to have a social life on top of that. So here is to the future and to everyone being able to tick those things off their lists.